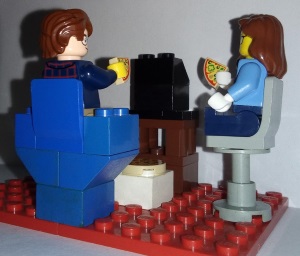 B and I originally met at university, we weren’t on same course and neither of us really went out to pubs or clubs as neither of us drink, so it wasn’t a traditionally “met at uni”. It was lucky that we crossed paths at all to be honest. I was living in one of two rooms above a family where I had been for the few years I had already been studying, the student in the other room had graduated and I was told that another student was going to be moving in. My landlord basically said “Her name’s B, she’s really nice.”, I think they said her dad had come with her to talk to them, and she was very quiet. I think because I’d been living there for so long already they knew I’d look after her and make sure she was OK. It had been nice to have the whole upstairs of the massive house to myself as I could pick an choose when to shower or cook, but I figured it would be nice to have someone else up there to talk to.

I remember briefly saying hello to her dad when she was moving in and vaguely remember introducing myself. I told her I could run a cable so she could share my internet connection, and that if she needed anything she just had to knock on my door. I do remember thinking she was attractive even at that first meeting, but didn’t think anything of it as part of me figured she was bound to already have a boyfriend and wouldn’t be interested in some old, tee-total nerd. She was only there for about 6 months, but by the time she left she was comfortable enough to come into my room to watch Buffy DVDs, share a pizza and chat about rubbish. She’d also managed to break my computer chair by nervously spinning it left, then right, then left, then right, when sat chatting. By the time she moved out it had developed a huge squeak that never really completely went away.

Her family would give her money to buy food etc. and despite liking takeaways she didn’t have the confidence to ring for one, or even to feel OK with getting it delivered where it might disturb the landlord’s family, so that was my job. She would give me the money and I would ring and order, then run downstairs to tell the landlords family we were expecting one, then go back up, then run back down again when the doorbell went. Yes, “ring” for a takeaway! Ordering via an app or the internet wasn’t really available back then… we’re that old!

I even brought her a present back when I went to Canada for a conference. Maple Syrup Bear Biscuits… she still remembers my buying them, and wants to get more if we ever visit Canada! Food is generally the right gift for B, she doesn’t like flowers, or posh filled chocolate or jewellery. She would much rather some biscuits, or cake, this is how early on I’d figured that out!

She’s told me since what when she first moved in she actually thought I might be gay because I was so nice to her. She’d then noticed the Buffy and Seven of Nine posters on my wall (Told you, nerd) and figured I probably wasn’t.

When she moved out it was quite sad because I was going to be alone at the top of the house again, but I’d seen about half a dozen other students come and go so figured there would be another one along at some point. We had each others messenger details ( That’s MSN messenger… it’s like FaceBook messenger… only about 10 years before ) and said we’d try and meet up after the summer. I wasn’t interested in her relationship wise, I’d never had a relationship with anyone before so I’d didn’t really enter my head, and she was dating someone at the time anyway. She was actually moving into a shared house with him the following term which is why she was moving out.

I remember her contacting me about something involving her last rent check, or that I gave it to the landlord or something like that. And I then rescued some paper work that she’d left in a drawer in her old room (Just one drawer… in the middle… no idea how she’s missed it at the time. After 10 years together it makes more sense now!). We only met up once or twice in her shared house the following term and I met her boyfriend and housemates etc. Then she graduated and moved back home to her mums house. I still had a year of uni left to finish off but we sent each other the odd online message and email so contact was still there ( If you’re wondering about the maths, I was at uni for about 7 years by the end. I wasn’t stuck repeating the same year like something guy from an american college comedy, was doing a Phd. Living in that house with that family is still the longest I’ve ever lived anywhere! )

When I’d finally finished at uni and got myself a “real” job, I realised I was only about a 30 minute drive from where B was living and we thought we’d meet up. I visited her at her mums house a few times, and she’s pop down to my flat to see me, either getting a lift from a parent, or I’d drive to pick her up. We were still just friends hanging out at this stage, as I said before neither of us drink so going out and meeting people that way just wasn’t something either of us was comfortable with. She was still officially going out with her boyfriend but they were both living back at their original homes now which was several hours of travelling backwards and forwards so I think that was quite a strain for her.

We did go out one evening and I think everyone assumed it was a date, and to be honest from the outside, it does look like one, but we were genuinely just friends hanging out. I’d just got a pay rise at work and wanted to celebrate getting it, B was more than happy for a plan of going to Frankie and Benny’s and then going to the cinema to see Transformers. So that’s what we did, I drove up and collected he and we went off for our non date. She told me afterwards that she was worried about how she looked, and what if people saw me with her and though she was my girlfriend, suggesting I should be embarrassed or ashamed to be seen with her. I said that I would have been perfectly happy if people thought we were going out I’d be proud to be seen with someone so nice. We had non-date food, potato skins, pizza, garlicky things etc. because we wen’t out to impress each other or try for kiss or anything later. Then we went and watch Transformers with sweets and pop corn and that was the end of our evening.

Becky had said afterwards that she was really nervous and wanted to look nice, and even got one of her sisters to straighten her hair… something that’s shes never actually done since. She figures that she probably should have seen this as a sign she was interested, but didn’t want to entertain the idea because 1. Already having a boyfriend and 2. Assuming that she “didn’t have a chance with me as I would not be interested in someone like her”.

Six months later, after more visits to see each other, more cinema trips, uncooked pizza and an incident involving non-cookies, she’s been not been with her boyfriend for a few months and I decided I was going to tell her that I was interested in being something more than friends.

She had been diagnosed with depression during this time, which people seemed to put down to her splitting with her boyfriend, but I think the split just happened to come at the same time. In fact it may have even been her mental health issues that brought forward the split as I’m not sure he was very understanding of what she was going through in her head. When she was on antidepressants she had actually tried to stop online communication with me but even then I figured she was better if she was talking to someone. Also, I really enjoyed chatting with her and knew I didn’t want her to go away, which was probably the start of me realising I wanted to always know her and didn’t want a life where she wasn’t around. I was nervous about all this, but I knew I still wanted to pursue something more. This was highlighted by me constantly name dropping her to my mum when I’d last gone to see my parents. As I said before I even chatted online and face-to-face with some good friends and family about what it would mean going out with someone on suffering with mental health issues and they gave me the confidence to go for it.

I finally asked her out when we were waiting for our takeaway Chinese to arrive and were watching that weeks new episode of Dr Who. She said “Yes” she’d like to get closer, and that was that. We said we wouldn’t tell people for a while, but then I got a text from her a few days later asking if she could tell her dad and it was official, I had my first girlfriend and we were officially “us”. 6 months after that we’d already moved in together, 6 more and we were engaged and then married 6 months after that!

Apparently, her grandmother who had helped her move in, but I can’t remember meeting, once said to her back when we were sharing the house together at uni, “You should go out with that nice man who lives opposite you at uni, he seems nice.”, funny how sometimes grandparents just seem to know whats going on isn’t it! 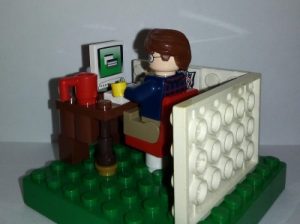