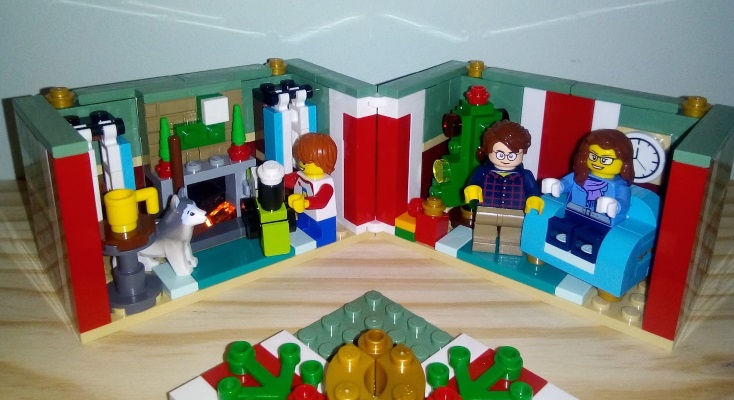 I managed to get the Limited Edition Lego Present this year that you can see above, featuring ourselves obviously.

This year I’ve also again got the Lego City Advent Calendar and I’ve decided to blog each day’s build on the evening of that day. I’m not sure if I’ll add them to this post, or do separate posts for each day, we’ll see what works best. Building Lego helps keeps me that little bit more together ( Pun intended ) so hopefully this’ll mitigate any “Oh crap I’ve not brought B any presents yet” stress!

I know some of you wont be overly interested in the Lego side, but I’m going to try and find something interesting / related to our lives to say about each thing that gets built… and considering I won’t know what it’s going to be, that could be amusing.

When Star Wars Episode 7 came out at the Cinema. I’d not seen the previous 6. My mate at work organised a night out to see the first 12:05 showing and B and I thought it would be a good idea. Trouble is we then had to binge watch the first 6 before we went!

X has a thing about “pennies”. “Pennies” covers all type of coins and the collection in his Fire Engine money box (Brought for him by my Nan) now contains what was “My” 1p,2p and 5p collection from the jar in the bedroom!

I wrote B’s car off on the way home from our wedding by hitting a deer!

Two of B’s sisters are twins, they are not identical but it did mean we were a little bit worried when B got pregnant just in case!

We don’t get much snow where we live, so when we do we all get a little bit over excited. We did actually get a good load last year and when we went out to play it in we found an abandoned, half broken, plastic sled… so we adopted it! Waste not – want not!

X now insists on getting hot chocolate now when we pop out for breakfast on a weekend morning!

During the summer I started constantly keeping one of X’s plastic spades in the car. That way, when he randomly said he wanted to go onto the beach when we were driving past we were prepared… It’s still in there!

As a child I had a radio control car (A “Chipmonk”), one day it randomly jumped off the shelf and scared the crap out of me. Managed to figure out that a coin had touched the aerial. It would seem copper touching the aerial counted as a signal and it wasn’t possessed!

When we were “dating” B and I never actually went on a date… except for once when already on holiday together in Spain we had a meal out together.

I don’t like professional football. I’m sorry, I just really can’t understand why someone would spend their time watching it. No, not even for “The world cup”.

I still have my original Lego train from when I was a kid. It had electrified rails and a massive control box that just had a “Fast / slow” dial on. All the modern ones (Which I now have 2 of) have battery powered trains and a remote control… but the rails all interconnect!

B does not like ice-cream, of any kind. X and I on the otherhand do have quite a thing for it!

Much as Ice-cream isn’t festive. I still think someone walking down the road eating an ice-cream in December is acceptable, because eating ice-cream is always acceptable.

I really do want Lego for Christmas (And Birthdays). For years B has been responding to people saying “What shall we get L this year” by saying “Just get him some Lego, I can tell you what he has” but people have always assumed she was kidding!

B and me have had the same Christmas tree all the time we’ve been together, this will be it’s 11th Christmas!

B and I had 3 cakes on our wedding day… none of which were wedding cakes! One Starship Enterprise, one Dragon/Dinosaur and one castle!

When we’d just started going out, B tried to make me some biscuits to take away with me to visit relatives… she managed to follow a recipe for scones thinking it was a biscuit recipe and didn’t realise until they came out of the oven! They were actually really nice scones, and she also made some biscuits to make up for it too!

About 13 years ago, I went off road quad biking for my mate’s stag do… I was the one that came off and broke both my wrists! The bride was grateful it wasn’t the groom, and my mum got a free invite to the wedding as I needed someone to drive me there!

Don’t tell him, but X has actually got a radio controlled car for Christmas this year! I promise I’ll let him have more goes than me.

When we were renovating our house when we first moved in, my dad did loads of work for us. One thing was taking a wall out to make the kitchen larger. He managed to let loads of rocks roll into the front of our shiny white fridge freezer which now has a series of dents in it. I wouldn’t mind but he was a general builder for 40 years so I’d of thought he’d see it coming.

We have a backwards clock in our kitchen, so it runs counterclockwise and the numbers also go counterclockwise… it drives mine and B’s parents mad when they visit and they keep telling us to get a different one! I think it’s great!

One of X’s first toys we got him for Christmas was a plastic beeping robot… yes, it was very annoying… it ended up living in the car!

When X was only just walking, we were out walking R and the air sea rescue helicopter flew over… X started dancing to the noise in the middle of the path.

When we went to visit Father Christmas this year, we queued for ages and all X could think of when asked what he wanted was “Daddy knows”.

Well, that’s it for Lego Advent for another year… shame they don’t do a count down calendar for anything else really! 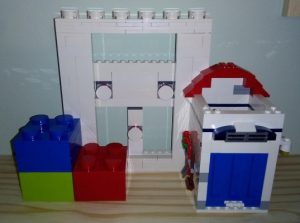