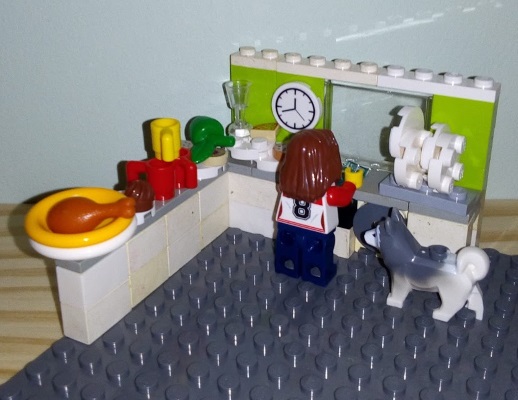 B and I have just been talking about our kitchen and what it’s lacking. It started with B looking at doing a load of washing up, unfortunately this particular load contained some of the of the following which have been sat there for at least a day, if not quite a few!

I’m sure you’ll agree these are going to be washing up “highlights” for her and the phrase “I’ll just leave them to soak” will be used! B will get through it though, at least a big chunk of it just to give us a bit of kitchen space back.

Some people might say I’ve got a bit of thing about washing up, but I haven’t really. My summer job during college and uni was washing up in a local restaurant, so I can wash up really fast, and really well… and it means I’ve got fairly high standards too. This also means I am generally against dish washers as standard. B is actually fairly good at washing up, so I’m not worried about that. It’s other people who sometimes make me grumble and mutter when I get things out of the cupboard that aren’t quite up to scratch (but I am always glad of the help!). However, although washing up is a “strength” I try not to actually do it that often. This isn’t because I’m mean and lazy, I genuinely have good intentions! It’s because B and I often discuss ways she can help around the house in order to make her feel better about her contribution and washing up usually comes up. Other things like going shopping, taking the dog out, or cleaning the bathroom are often one step beyond what she can cope with. So, I leave the washing up alone when I can resist it so that B can try and get it done.

However, this then leads to several problems. Number 1 is that B will not always feel up to being able to do it right away, so things build up until we have nothing left to eat off of, or cook with… there are several signs that this is nearing the “edge”

This then also leads to the panic / emergency washing up “session” the night before a parent is due to come around. This is because a) B thinks she’ll get told off for not doing it and b) I think they will do it for us to be helpful, but I’ll then get miffed that one of the plates isn’t cleaned to perfection!

However, I don’t get on at B to do the washing up, mainly because her reason for not doing it actually fairly solid. When her brain is going off on one and spinning out of the control she can get very bad, making her angry, distressed and all manner of other negative things. Standing at the sink and washing up is fairly boring and so it can often cause her brain to go wandering off on tangents, which is very bad.

So… this has lead us to the following conclusion. We need a dishwasher. We just have one little problem. When we were enthusiastically laying out our kitchen 5 years ago we never actually made space for one. Yes, it was very likely me saying “We don’t need one of those”, I recognise this and I apologise. We have space for one appliance near the sink where we have water/waste, the next nearest is then the other side of the doorway and things get worse from there. We talked about digging up the floor to get the water the other side of the door, we’ve looked at going up and over with the water, and using the outside for the waste and we’ve researched table top dishwashers that don’t need plumbing. However, we now actually think we have a solution! We’re going to put the dishwasher in the centre of the kitchen, against a large supporting pillar! This initially sounds like madness, but it would actually place the dishwasher directly below the boiler so we can simply drop pipes and electric down from the room above. We can get a pump in order to get the waste back up there again, which can then go out the same way the bathroom waste goes! This will be one of those macerator type pumps such as a Saniflow which it would seem can do more than the distance we need. Trouble is, given my Dad was a general builder for most of his life I tend to call these Crap Crunchers in my internal dialog so I’ll have to try real hard when I get a quote! Yes, we are a little bit excited about our plan! Yes, I have come around to the idea of a dishwasher. No, we haven’t actually asked anyone to tell us how much this will cost us!

So, onward to conversations about how we haven’t scrapped our plates properly, and why we brought something that couldn’t go in the dishwasher!