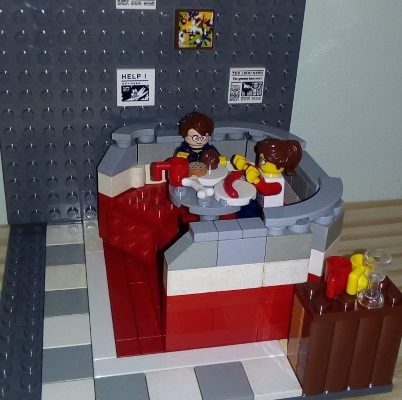 A few weeks ago was B’s birthday, I’d been quite worried about what to get her and was leaving it all up to the last minute to be honest. Usually I cheat and just overbuy at Christmas and keep something back, but I cocked that up this year and gave her everything I’d brought, which was a bit stupid! We kept saying we could do something or go somewhere but B couldn’t decide what she wanted to do or where she wanted to go, and because we’re never sure if she’ll have a bad day I get scared to book anything.

In the end I got brave and booked a night away, a meal out and semi planned a cinema trip (If there were any decent films on at the time). The night out wasn’t in a posh hotel as people might expect for a “Birthday Weekend”, because that would be a massive chore for B and not a treat at all. It was simply a night in a Travel Lodge as that way she knows what she’s getting and doesn’t really have to see anyone if she doesn’t want to. I also added the late checkout option and didn’t choose breakfast so that she didn’t have to worry about getting up and out of bed which she’d appreciate.

I was actually part way through booking it at work when B rang me for one of her chats. And yes, I did log my time at work as “Non Productive”! These chats with B can range from her simply wanting to hear my voice to make her feel better all the way to her feeling really low and struggling with her thoughts. Luckily, this time she just wanted to hear my voice and have a chat, so I was able to finish clicking through and booking at the same time without her realising.

My parents had already agreed to have X for the night for B’s birthday, and even offered to stay at our house so that R was sorted too (She wouldn’t like going to kennels, so we always have to factor her in when we go away somewhere). So that was everything we needed sorted out, funny how the actually going away isn’t the complicated bit!

We were only going about an hour down the coast, and we were planning on eating in the Frankie and Benny’s we’d been to before and had even been to on our first ever trip out. I booked the table online for 7pm, and in the “Additional Requirements” box I mentioned that B had anxiety and therefore a quiet, out of the way table would be best. I’ve never really asked specifically for that before, I’ve asked for a quiet table, but never given a reason. I figured the worst that would happen would be they would completely ignore it.

In the end, we didn’t manage to leave the house until about 2:30 on the day we went as B didn’t want to get up, and we had to sort out X before we went. So, our two days away was now down to one and a half… but then that’s parenthood! On the plus side, we actually made good time on the drive and arrived at about 4. We sat in the car in the rain and decided that we could probably do our cinema trip before we went for dinner, but we’d have to push the table back a bit. So we logged in and moved the table to 8pm figuring we’ve have a little bit of time after the cinema to get sorted and get there and eating late doesn’t bother us much.

We jumped out of the car and ran through the rain the entrance to the cinema. Note: By run, I mean that daft almost half run/skip that people who can’t run do when they’re caught in the rain! It was fairly busy in the lobby, but it wasn’t unmanageable. We both needed the loo so we split up and and said we’d meet back in middle when we were done. I was out first (Because lets be honest, us guys do have an easier job when just having a pee) so I thought I would start buying tickets on one of their self service machine.

Crap! there were only two seats left and they weren’t even together. Given that B doesn’t feel comfortable out and about much anyway this was obviously a non-starter! We were hoping to see Aquaman so that’s what I checked first, we then tried Bumblebee, but that was completely booked too. B then got back and I told her what was going on, although we we’re a little frustrated, we’d made sure to not really plan too much so we just accepted it and figured we could watch the film after we’d eaten as we originally planned. We get back to the car and tried to move the table booking back to 6pm so we’ll only have to wait an hour or so. Ah, crap again! We couldn’t actually now book anything before 7:45! We just left the booking as 8pm and sit in the car figuring out our next move watching the rain. In the end we decided to drive to B’s dad’s house 15 minutes away and see them for an hour or two before heading off to eat.

Luckily they were in, although were off to a party that evening which worked out well as we could just sit and watch their TV for a bit. That is, once we’d managed to fix it! B had managed to do something to the link between their freeview box and their TV so there was 10 minutes of “Press AV, or HDMI1”, “Now turn the other box on”, “Is it turned on?” before we managed to get going with anything.

We watched the middle hour of “The Mummy” (The one with Brendon Fraser in, good film, got the DVD. ) and then we set back out for our meal. We got there with plenty of time and managed to easily park which was a bonus and walked in. A member of waiting staff looked up our booking, seemed to remember it and then began leading us to a table. She led us to one of two massive round booths at the back of the restaurant… which as far and B and I are concerned are “The ones that the cools kids sit at!”. It worked our really well as it really did mean we were tucked away at the back out of the way.

A member of waiting staff came and took our order fairly quickly, we’d decided to share a starter so we could get going nice and quickly. Then we waited, after a little while the waitress came back over, apologised for the delay, explained that they were running behind and asked if she could get us anything. Then we waited some more… we ended up waiting for about and hour and a half before we got our food! You might think that would have been annoying or frustrating but to be honest we already figured we wouldn’t catch a film afterwards anyway and we really enjoyed the time just sat chatting without being interrupted by X’s requests for “Nnn-umberblocks” or “Sonit the hedgehog”. Yes, ‘Sonit’, he hasn’t yet got that he’s called ‘Sonic’, but were working on it. The food, as expected, was really good and just what we needed. We were both thoroughly stuffed by the end and therefore decided against getting a pudding.

We then set off to the Travel Lodge. We’d already checked where it was during our 3 hours after the cinema and knew parking might be an issue. However, we managed to get in and parked and got into our room. I then decided that I needed to have a biscuit or something sweet before bed and we knew the 24 hours Asda was right next door. B decided she wanted to come too and we wandered back down to buy some goodies. As we walked towards the front of Asda however it was abundantly clear that the large shutter was down and they were closed. Crap, yes because ‘Open 24 Hours’ doesn’t mean ‘Open 24 Hours” does it. It means 24 Hours, except for Saturday night when we close at 10pm as the next day is Sunday! So, no goodies before bed then as neither of us can be bothered to get in the car and drive off somewhere, especially knowing that there’ll likely be no parking when we get back. I’ll just have to settle for having a sugar in my tea.

The next morning we figured we’d go back to Frankie and Benny’s for breakfast as B really fancied Pancakes with Maple Syrup and Bacon, and I’m always craving a big cooked breakfast lately. We therefore ended up checking out of the hotel without needing to use the late checkout we paid for. But we’re not the people would would sit in the room saying “No, we paid for it, we’re bloody well staying until the end!”.

As we walked in for breakfast, we were told that half the waiting staff had failed to arrive… so we figured we’d be waiting for ages again. However, it wasn’t actually that bad and we’d factored it in so we would make a showing of Aquaman that started about an half hour after we managed to finish our breakfast. B tried to convince me to have the Pancakes with Bacon and Maple Syrup but I insisted on a massive breakfast bap. She was right, as soon as the food arrived I looked at hers and fancied that more than my own… I’ll try and remember to listen to her next time… to be fair she’s normally right!

There were a few more seats available for Aquaman this time, but still not loads. We ended up with two seats that were right in the front row and so we assumed we’d be sat there looking straight up for 2 hours and come out with stiff necks. However, as the seats reclined and once we’d both adjusted to having our whole range of vision filled with the screen we didn’t even notice we were that close to the screen.

So, overall it looked like quite a few things actually went wrong in our just 26 hours away. However, we weren’t bothered by any of them, we both really enjoyed having the break and we’re definitely planning on trying to have a few more trips soon. We’re even thinking of places we can take X for his first trip away… but he won’t be coming on all our trips. 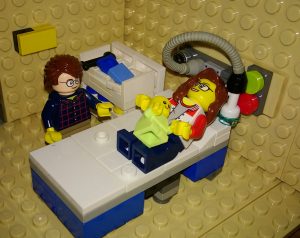